The primary intent of KMGK is to control the Kazakhstan participating interest in the Production Sharing Agreement in respect of the North Caspian Sea. 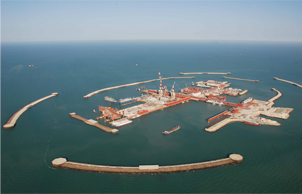 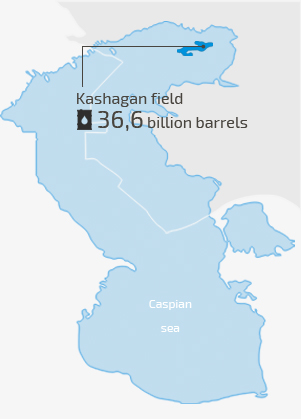 Kashagan field is one of the world's largest and most complex offshore oil fields discovered during recent decades with area of approximately 75 * 45 kilometers.The field reservoir is integrated hydrocarbons accumulation with 4.65 billion tons ( 36.6 billion barrels ) of oil in place.

The challenges for the field development are caused by reservoir's physical properties i.e. high reservoir pressure and high concentration of hydrogen sulphide in the fluids as well as by geographical location of reservoir - shallow waters of Caspian offshore oil and gas block which get frozen during winter period.

Due to the high complexity of the field calling for innovative technical and financial solutions for its development the North Caspian Sea Production Sharing Agreement (PSA) was signed in November 1997 between the Government of the Republic of Kazakhstan and the international consortium "OKIOC" (Offshore Kazakhstan International Operating Company N.V.) which was represented by international oil companies who had vast experience in development of similar types of oil and gas fields. In 2001 the functions of "OKIOC " joint venture were transfered to Agip KCO and subsequently they were passed to the NCOC (North Caspian Operating Company)- new Operating Company at that time. Details